It used to be called The Secret World, today it’s known as Secret World Legends, the modern horror MMO where everything is true and the skirts are short. Secret World Legends has a thriving RP community, and thanks to the adult nature of the game you can be sure to find a certain kind of person there. With clubs for you to meet up in and hotel rooms for you to retire to, Secret World Legends knows its audience and caters to it. For those looking to live a little more on the wild side, you can buy revealing outfits and even collars. Finding hookups randomly in-game isn’t easy though. You might get lucky, or you could head over to SecretWorldRP where you can find cabals (guilds) to join and a classifieds section to find that special someone for long term hooking up. If it’s a spur of the moment type of thing though, try The Horned God in London.

In Second Life anything is possible. You’ve got your medieval fantasy areas, you’ve got your cyberpunk regions, and then you’ve got the more adult areas. No matter what your tastes are you’ll find someone there who shares them. Second Life has been around since 2003, giving communities a long time to establish themselves. From fur to futa, all your hookup needs can be catered for in Second Life. It’s a fantastic spot to anonymously explore whatever floats your boat. Even though it has been around since 2003 the community is still going strong.

Finding the right community within Second Life to fit your desires may be the most challenging part. After you decide what you’re going to look like that is. The customization in Second Life is nearly endless which combined with the age of the game, makes Second Life a fantastic place to hook up. Just remember to be prepared to see anything, and I do mean anything. If it exists there’s a kink of it.

I have no words.

Take a look at just about any screenshot from Tera and you’ll see why it’s such an appealing place to hook up. The characters are hot, the clothes are tiny, and there are curves in all the right places. With a vast open world and a lively roleplay scene, Tera has everything you need for a good time. Unlike in many other games, you can actually pay for ERP in Tera. There are players wandering around, willing to sell themselves for people who want a good time. Some servers even have dedicated fan run brothels for you to enjoy yourself in. But if you don’t want to pay and want to increase your odds of hooking up you’ll have to play the game a bit so you can make yourself look good. Not the ideal scenario if you’re just looking for some quick fun.

Anyone who played on the unofficial roleplaying server can tell you that if you wanted to hook up you should head to the super powered night club called Pocket D. It was an ongoing joke there that the floors were sticky, and not because of spilled drinks. No matter what you were looking for you could find it there from Catgirls to futa, a super villain group that was actually a porn studio to your average club goer. If you waited around long enough you might even find some people brave enough and foolish enough to have their fun in local chat. Turning it into something of a spectator sport. Pocket D was an endless buffet of debauchery and everything was on the menu. Sadly City of Heroes shut down in 2012 but it is still held up as one of the best games to hook up in of all time. 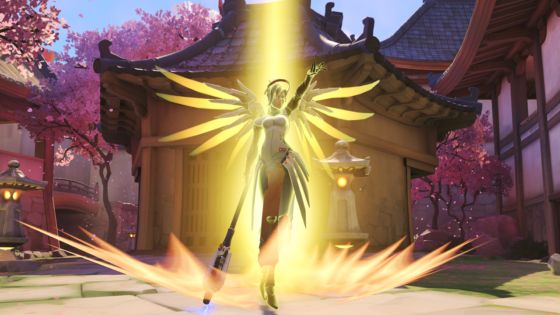 Overwatch might be the last place you think of when you want to hook up but actually, there is a thriving community of people getting lucky pretty regularly in the game. Wondering if you’ve ever seen it in action? Have you ever seen Mercy in her Imp skin following a tank around almost religiously? If you have then you’ve seen a Healslut. What are they? Well, aside from your own personal dedicated healer there are some naughty angles going on behind the scenes too.

While you may be lucky enough to come across one of these lovely ladies randomly, your chances of getting lucky are vastly increased by heading to Reddit. There you can find Healsluts not only for Overwatch but other games too like Guild Wars 2 and Civilization 5. Yes, even the seemingly innocent Civ 5 isn’t safe. Next time you see two people together in your online game of choice keep an eye out for the signs. A sexy outfit being worn by a character in a healing or support class faithfully supporting a tank, sometimes to the detriment of others. If you see these things, you might have just found yourself a Healslut.

Conan, Conan, Conan. You can’t have a list of sexy media without mentioning something from the Conan the Barbarian series. It includes books, movies, TV, comics, and since 2008, MMOs. Funcom started it off with Age of Conan, which allows players to go around topless, but it is Conan Exiles, the open world survival game that has made our list. One needs only to do a Google search for “Conan Exiles ERP” to find a long list of Adult Only, 18+ servers that specify they’re for ERP. Some of them even include PvP. So if you aren’t left satisfied you can really let your partner know it. The population of these servers aren’t very high but you know when you log in that you’ll get exactly what you’re looking for. With full nudity and sliders to adjust your...length, Conan Exiles embraces the naughty side of the original Conan stories, making it a great place to hook up.

Anyone familiar with Star Trek knows about Risa, the pleasure planet. But the fun doesn’t have to be limited just to Risa in Star Trek Online. Anywhere that you find roleplayers you’ll find people looking to hook up. Though Risa is, of course, a favorite. Be on the lookout anywhere you see radio DJs performing for players. Others looking to hook up will be there too. Thanks to it being Star Trek you’re sure to find whatever it is you’re looking for as the people there are more open minded than in some other games on this list.

You’ll be able to finally live out all those delicious fantasies you’ve had about Orion slave girls, catgirls, and yes…even a Jem’Hadar….hey, we don’t judge! For the best odds at getting lucky head over to Drozana Station. You will never find a more wretched hive of scum and villainy…wait, wrong universe.

Sometimes game developers of otherwise completely innocent games will throw those naughty roleplayers a bone by putting in buildings for people to congregate in. It’s impossible to know if that’s what the Guild Wars 2 creators were thinking when they made Divinity’s Reach, but there is one building that is perfect for a… good time. So players did exactly what you would expect players to do: they opened up a brothel. Oh yes, in the Purple Orchid you could go to pay for some fun. Hang around at the bar, flirt with the pretty employees, and they might invite you to one of the bedrooms upstairs. But the Purple Orchid isn’t the only place to hook up. Dotted around the world are little homes and inns with bedrooms and where there’s a bed there’s the potential for fun. If you don’t want to be caught in a public place there’s even a private inn inside the player home, an instanced, invite only place for you to do whatever your imagination comes up with.

GTA has never shied away from allowing players to hook up, though in the past it has only been with NPCs. Now, thanks to GTA Online, part of GTA V all of that has changed. The variety of outfits you can pick from coupled with the ability to get private rooms makes GTA Online the best of the Grand Theft Auto franchise to get a little action in. And while private rooms are the best place to go so you don’t get caught there are tons of other places to have fun too, including inside cars. But if you do that, just keep in mind that someone could find you and interrupt things, which gets very annoying after a while. At the same time, you might just meet someone who wants to watch. Great if you’re into that sort of thing and they are too. More often than not though it’s just a little bit awkward.

If a dating website had a baby with online gaming, the result would be Utherverse. Get yourself a home in a 3D world and hook up with people from all over the world. Set yourself up a dating profile and… well, anything could happen. Unlike the other games in this list, in Utherverse you’re looking for people in your local area to hook up with in real life. So you can take a test run in the game and if you’re compatible, move things into the real world.

There are some downsides to this method, however. First, there is, of course, the risk of running into someone who it doesn’t work out with. Second, at its peak in 2008, it had nearly 2 million users and their accounts still sit on the site, so you’ll have to sift through a decade of old accounts trying to find that someone special, only to then find out they found someone a few years ago and had completely forgotten about Utherverse. On second thought it might be better to go with another game…

When you think of hooking up online the last thing you might think of is a spaceship. But that’s exactly what you get when you go to EVE Online looking for the ERP. It is out there is a thriving community taking part. Not only do you have average roleplayers wandering about in space, you can, like in a few other games, pay for the pleasure of someone’s company. Yes, in a game in which you are a spaceship you can pay to hook up with other players.

No, we aren’t talking about ship on ship action. Even if those nacelles are irresistible. It is entirely text based and done in privacy. You don’t want to get caught doing it in public however as there isn’t the tolerance for it in EVE that there is in other games. Still, if you’re careful you can have a great time and make some ISK while you do it.

No list of ERPy games would be complete without mentioning World of Warcraft. For many, the Goldshire Inn on Moon Guard was their first introduction to the wild world of ERP. These days the ERP is still going on a strong as ever. You never know what you’ll find when you end up there, but it’s always good to return to your roots.

Which one will you go to? Was there a game we didn’t include that we should have? Have you ever seen a Healslut and didn’t know it? Where did you get your ERP start? Let us know in the comments below.