Of all the ways to make your character stand out in an MMO, mounts are easily the best. A new suit of armor might last you a raiding tier, but an awesome mount will stay with you forever. From an artistic perspective, they also represent one of the best ways for developers to express their vision for a game, creating a world full of creatures that can be both awe inspiring or terrifying. They even represent a potent power fantasy; nothing beats the satisfaction of taking your ultra rare mount for a spin around the most populated city.

Most MMOs have a huge variety of mounts to choose from, so we went to work looking through all of them and counting down some of our favorites. Some might be silly, some might be straight up awesome, and others might not look amazing, but subvert our expectations. Either way, all of these mounts are deserving of recognition.

Mythology has a long—err—history of taking a few different animals and going Dr. Frankenstein on them to create something entirely new. Gryphons are a staple in plenty of video games and fantasy universes, but owlbears? Now that is something new. Enjoying a long history in Dungeons & Dragons, owlbears have been around since the pen and paper RPG’s first supplement, Greyhawk. Honestly, of all the animals you could mix together, owlbears might just be my favorite. For starters, an owlbear lacks the biggest benefit of being an owl: flying. That is hilarious. But while their representation in Neverwinter as a humble mount might undersell the true terror of a half-bear, half-owl that likely lurks around a night shrieking like a banshee, the fact that you get to ride one of these monstrosities alone is reason enough to include them on this list. Oh, did I mention they also eat wolves? 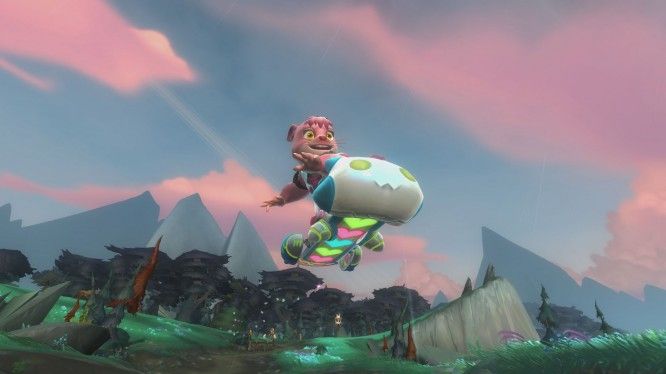 In Wildstar, hoverboards are more of a type of mount than one mount specifically, but that doesn’t mean the whole category can’t be on this list. Each one varies in colour and patterns; personally, I’m impartial to the Glitter Kitty Hoverboard. There is just something so satisfying about having my beefy Mechari warrior make his weekly rounds on a space-aged piece of equipment stylized a la Hello Kitty. Regardless, hoverboards deserve mention because they represent a serious departure from the norms of most mounts featured in MMOs. In a genre saturated in fantasy, Wildstar brought a breath of fresh air with its humorous sci-fi aesthetic, and the hoverboards represent that perfectly. It’s a little love letter to Back to the Future. Also, hoverboards are notable for how easily they allow players to traverse various terrain, a noticeable step up compared to other mounts available in the game. Gliding across vast lakes pretending you’re Marty Mcfly is a pretty memorable experience, enough to make it on this list.

Okay, okay, you caught me. Harry Porker from TERA is easily the dumbest mount ever conceived. But if I’m totally honest, I felt like I would be doing myself a disservice for not including at least one novelty mount, and this one takes the cake. Literally. Trust me, I spent hours doing my due diligence and looking at just about every mount in every game, and Harry Porker is by and far the dumbest mount I found. My favorite part is, all they really did to make this pun was slap some round-rim glasses on a pig. There’s no scar—nothing to tie this pig to the Boy who Lived. It’s a half-hearted attempt at a lackluster pun, but what can I say? This little pig really cast a spell on me.

Chocobos have been a staple of just about every Final Fantasy and A Realm Reborn is no exception. Players will earn the right to ride a chocobo at level 20, and while these birds are pretty unexceptional by themselves, what really makes them shine is how customizable they are. A lot of games treat their mounts just like items; you pull them out when you need them and when you’re done they disappear for good. Final Fantasy XIV made a really smart decision and carried over a lot of the chocobo mechanics from FInal Fantasy XI, including the ability to level them up, change their colour, name them, and equip them with special armor known as barding. While FFXIV is littered with a ton of mounts, every player will agree that their chocobo has a special place in their heart. Nothing beats the excitement from finally obtaining that rare colour you were working towards, or nabbing that amazing barding for your feathery pal. And no one will likely forget the hours they spent in Eorzea fighting baddies alongside their chocobo in the quest to level them up.

The biggest feature of Archeage is arguable the massive ocean that divides the three major continents. Traditionally, players had to cross these pristine waters using boats, but now you can abandon those man made constructs and really tap into your inner Aquaman. Plenty of MMOs have had flying mounts, but water-only mounts? Now that seems pretty original. Also, just ignore the massive controversy surrounding these mounts, it will just make you more sad about Archeage than you already are.

One of the things about mounts is that, in the landscape of MMOs, there is a common thread between a huge swath of them. Horses? Check. Turtles? Check. Insects? Check. There seems to be a pretty big list of staples you can expect from just about every game, and it’s a real shame when the entirety of their mounts pull from the tired tropes of every other MMORPG. This is exactly why Shadowtail stood out to me. Rift often gets dumped on for its undeniable inspiration from World of Warcraft, but because the game is entirely unhinged from the artistic stylings of Azeroth, it allows them to go above and beyond in a few areas. Namely, by making a giant colored squirrel who acts as the harbinger of the end-times. Yes, you read that right. This little nut-hoarder is apparently the fifth horseman of the apocalypse.

Archeage might be a flawed game, but one thing I really loved was the dedication to actual physics. It wasn’t perfect mind you, but most MMOs treat their mounts as if they are immune to momentum . Your flying mounts can shoot up straight in the air, stop on a dime, and then hover there forever. It’s a bit silly. Archeage changed up the flying mount formula by creating gliders, which gave you the freedom of flying, but also challenged you by restricting that freedom. The result was exhilarating. You can read endless forum posts and blogs complaining about how flying mounts ruined World of Warcraft, but few, if any, can be found about Archeage’s gliders. The fact that they weren’t magical flying machines meant that you were constantly looking for ways to use them effectively. Suddenly, it made sense to detour a bit to run up that hill if it meant getting to take off in your glider and save a few seconds while soaring through the air. I haven’t even mentioned that later models allowed you to attack and drop bombs. Gliders were liberating, and, more importantly, they subverted expectations on how flying mounts should work.

These mounts deserve special mention if only because they are likely the most unobtainable mounts in any MMO. These trophies are reserved solely for the best of the best: the few top-ranking teams at the end of each season in WoW’s famous Arena PVP mode. You want exclusivity? How about a mount that is retired the moment you receive it. That’s right: each season in the Arena ends with top players being awarded with this mount, and then it is locked in the Disney vault, near the back where they forget about it even after 10 years have passed. Just about every mount in World of Warcraft can be earned through luck and persistence, but Gladiator Mounts can only be earned through pure, raw skill.

The Core Hound earns a place on this list because not only is the mount one of the better designs in World of Warcraft, it also serves two great purposes. The first purpose is what I mentioned earlier when I talked about power fantasies. For years, these hell-puppies served as servants of Ragnaros, one of the most famous raid bosses in any MMO. Finally being able to ride one them was a solidification of the player’s influence on the world, showing true mastery of Azeroth by taking foes once intimidating and now claiming ownership over them. Next thing you know, people will be flying around on Onyxia’s drakes! Just kidding, they already are. The second reason Core Hounds deserve a spot so high on this list is they are also the reward for one of the more challenging tasks in recent Warcraft history. Wildstar was a game built because a large portion of the MMO audience talked fervently about how they missed the glory days of vanilla World of Warcraft. Everyone played it for a bit and then remembered what a barbaric time that was. For the tenth anniversary of World of Warcraft, Blizzard gave fans a similar taste. You want old school WoW? Nothing says old school like a 40 man raid, right? And thus, this mount was the reward for those persistent enough to make it through that raid. The best thing about this mount is the lesson it teaches everyone who owns it: In a 40 man raid, the real enemy isn’t the boss, it’s the 39 other players with you.

FInal Fantasy XIV has never been one to break tradition. Both XIV and XI are MMORPGs well known for their long and epic quests lines, sometimes taking players hundreds of days to complete. XI had Artifact Armor and XIV has the Zodiac Weapons, but Kirin takes things to almost absurd heights. For starters, players will need to obtain the rare mount drop from each of the game’s six Extreme Mode Primals. Doing so is a feat in and of itself when you consider how many hours it will take to run those primals over and over (excluding failed attempts), finally getting the mount to drop, and then winning the resulting need roll for it. If I was good at math, I’d probably take the time to calculate your odds, but lets just pretend I already did that and say they’re astronomical. Kirin represents a true mastery of Final Fantasy XIV unlike no other. By the time you unlock it, each of the Extreme Mod Primals will likely be foot stools you rest your feet on after a hard day of gambling at the Golden Saucer. Not only that, but the reason Kirin sneaks ahead of the Gladiator mounts of World of Warcraft is because Kirin is also one of the coolest looking mounts in XIV. Part horse, part chinese dragon and glowing with a yellow light so ethereal it’ll make your soul tingle? Yeah, this is easily the best mount in any current MMO.

There it is, 10 glorious mounts that really show off one of the best aspects of MMOs. Some might be a little dumb, some might look unimpressive but subvert our expectations, but all of them are notable for how they changed the game or made player’s knees buckle with envy. Of course, everyone has their own opinion, and we want to hear yours! Is there something that should be on this list? Sound off in the comments!